skip to main | skip to sidebar

First chickens tried to kill us all, then pigs, and now ...

In something completely unconnected with our intended theme for the next issue, a previously unknown virus that killed four of the five people it struck in an outbreak in South Africa last year has been identified as part of a family of viruses humans can catch from rats.

Which, fast on the back of piggy sniffles, is a little worrying. Other animal-derived diseases such as Ebola have failed to spread widely because while it is extremely infectious and incredibly deadly, it has only so far affected isolated areas and presents symptoms and then kill its victims so quickly that outbreaks can be contained. SARS, similarly, only becomes a problem in certain conditions.

The high death rate for Lujo is worrying, though the conditions in which its victims became infected, and their medical histories may well be a significant factor - just as many of the deaths from swine flu have been from people with previous, though sometimes unidentified, medical issues.

It's apparently only a matter of time before our number's up if we don't change our ways, as scientist have warned that human-made crises are 'outrunning our ability to deal with them'.

The world faces a compounding series of crises driven by human activity, which existing governments and institutions are increasingly powerless to cope with, a group of eminent environmental scientists and economists has warned.

Writing in the journal Science, the researchers say that nations alone are unable to resolve the sorts of planet-wide challenges now arising.

Which makes you wonder quite how screwed we actually are, if you consider the inability to get international cooperation on climate change, fishing etc etc
Posted by Unknown at 12:00 No comments:

Back on the shelf

But in some slightly-more-welcome news, President Barack Obama says the US has shelved plans for a missile defence system based in controversial bases in Poland and the Czech Republic.

The system, so beloved of former President George W Bush and Neo-Cons everywhere, was intended to blow a missile attack on the US out of the sky. They said it was to stop 'rogue states' such as Iran and North Korea from attacking. But since Russia is pretty much the only country that is a) not a mate of the US, b) has ICBM capability and c) is far nearer to Poland and the Czech Republic than, say, Iran, it's hard to refute Russian allegations that the system was aimed at them.

Doubled posting today, to make up for not doing so for ages.

And speaking of returns - swine flu looks to be on its way back, according to Sir Liam Donaldson, England's chief medical officer.

Meanwhile, the Health Protection Agency has reported one confirmed case and one possible case of resistance to the flu drug Tamiflu.

There has been less than 30 cases like this worldwide with experts monitoring them for signs that the virus is mutating.

Who's fool idea was this?!

Venezuela's President Hugo Chavez has announced that the country will soon take delivery of Russian missiles with a range of 300km.
Posted by Unknown at 12:00 No comments:

Worried that you're not prepared? Concerned that you might be too far and too lightly-armed to make it back to your back-garden bolthole? Well worry no longer, as the latest in on-the-spot survivalist techniques makes it to your computer.

We are reassured that they can show you how to: "Get inside the mind of an angry mob of parents with hungry children so your family is the last one to be attacked and looted."

Or, more worryingly, an angry mob of pre-armed survivalists who believe they are preventing barbarism.
Posted by Unknown at 12:00 1 comment: 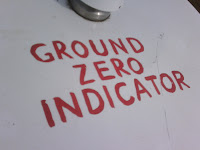 Amazing what apocalyptia you find during a nice cliff-top walk in Cornwall ...
Posted by Unknown at 12:00 No comments:

Since we're *just* 1,200 days away from 21st December 2012, it seems fitting to revisit this particular apocalyptic curio.

Since the year 2000 turned out to be such a disappointment, 21/12/12 has increasingly become the new focus point for the apocalyptic community, apparently all based on the idea that the Mayan civilisation's calendar 'predicts' either the end of the world or, at the very least, some major event in world history. Armed with this snippet of half-baked information, every preacher and New Age crystal therapist under the sun has their own prediction about what WILL UNDOUBTEDLY HAPPEN!!

But who to trust? Do you believe those who reckon we're due an alien invasion or that it's The True Dawning of the Age of Aquarius or that it's finally the Rapture?

So it is with some relief that 'NY Times Bestselling author' Gregg Braden's Fractal Time: The Secret of 2012 and a New World Age cuts through the crap and tells us what we need to know, by revealing this little 'fact':

"On December 21, 2012, Earth will be perfectly aligned with the galactic center for the first time in over 5000 years — and attuned to the source energy of the Milky Way. Gregg believes this heralds "a rare opportunity to come together as a family on this planet, and to learn from the mistakes of past civilizations."

A US judge has thrown out a case against God, ruling that because the defendant has no address, legal papers cannot be served.

Nebraska state senator Ernie Chambers sued God last year, saying the Almighty had "threatened him and the people of Nebraska".

After reading The Revelation of St John, we're inclined to agree with him ...
Posted by Unknown at 12:00 No comments:

Station ident: This is the end of the world as we know it ...

Apologies for the break in service - nothing too apocalyptic about that, just a temporary glitch :)

To reinvigorate your souls, enjoy the following sermon from the always-entertaining House of Yahweh, a sect out of Texas that has spawned branches in a number of other countries with their brand of fire-breathing apocalypticism (more about them in the next issue). Delivered by the man known only as "the only man who holds Yahshua's Authority on the face of this earth, the Greatest Teacher in the world, the Greatest Kahan, our beloved Pastor and Overseer Yisrayl Hawkins", it contains the most beautiful bit of post-failed-prediction justification ever ...

Basically, the reason the world didn't end when they said it would in September 2006 was because ... wait for it ... God decided to hold it back a bit.

The date that we gave, September 2006, that I found in Scripture was the same date that the hidden codes book shows would be the nuclear holocaust. Of course, that nuclear holocaust, they don't know it, but we know that it's being held back by YAHWEH as Revelation 7 shows. But this will be the beginning of The End of man's governments of the people and by the people.

So God left secret messages in the Bible about when the date of the end of the world would be, but then he changed his mind, but another bit of the Bible said he would anyway, but it's going to happen most definitely ... etc.
Posted by Unknown at 12:00 No comments: